Basketball is a game of great fame, with fans following it all over the world. Hoops are readily available on many school grounds and in residential areas, making the game an inexpensive and enjoyable activity. Itâ€™s quite common for one person to start shooting hoops alone, only to be later joined by others.

According to modern rules, the game is played on a court with two opposing teams. At each of the far ends of the court there is a hoop attached to a rectangular backboard. The board is suspended on a pole or some other fixture. A funnel-shaped net is attached to the hoop.

Basketball is new in comparison with other sports. It was played for the very first time in the late nineteenth century. The game was invented by Canadian physical education instructor and minister, James Naismith. It came from the need to provide vigorous indoor exercise during long winters at Springfield, Massachusetts. Initially, the ball was thrown into peach baskets, hence basketball. Iron hoops and nets were introduced a bit later to make the game more fluent.

Olympic games include basketball. In North America, the most famous basketball organization is the National Basketball Association (NBA). NBA is only for men and it comprises 29 US clubs and a Canadian one. NBA is one of the four major North American professional sports leagues. The other three are the Major League Baseball (MBL), the National Football League (NFL) and the National Hockey League (NHL). 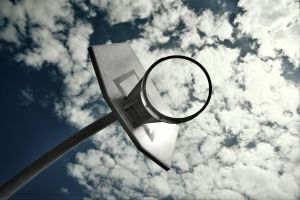 Internationally, basketball is governed by the Swiss-based Federation Internationale de Basketball (FIBA) and includes some 75 countries. European organizations number the Euroleague, the Eurocup, the Balkan League, the Baltic League and others. Nevertheless, the sport has numerous adherents in Asia and Australia, with women playing it as well.

Good players are rewarded royally. For example, in 2004, Michael Jordan made 35 million dollars, while Shaquille O'Neal made almost 32 million. Worldwide, basketball is watched on TV by an average of half a billion viewers. This provides media companies with a lot of potential for advertising revenue.