Hockey is purely a team game. Various types of hockey are played across the world: field hockey, ice hockey, roller hockey, and sledge hockey. It's adventurous entertainment for about an hour. This game is part of sporting events such as Olympics, Commonwealth and Asian games.

The game is divided into two halves of 35 minutes usually, with a short break of 5 minutes. Both teams have 11 players on the field at a time. Some extra players - up to 5 - are also part of the team and may be used as replacements many times throughout the game. Nevertheless, no substitutions are allowed during the penalty corner. The ball should dribble with the help of the flat face of hockey stick and the brims of is head and handle. The goal keeper may use his hands and other body parts to prevent the goal. When the ball is kicked inside the opponent's goal post, a goal is scored.

Besides the goal-keeper, players have roles such as: fullbacks, midfielders, and forwards. There are two referees (umpires) who may have one half of the field each under control.

Some conditions for foul occur: 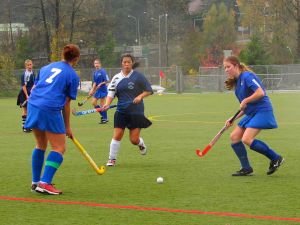 For mistakes made by defenders in their area when the adversaries attack, the referee can dictate different ball kicks, from the spot the obstruction took place. Such penalties are: free hit, corner, penalty corner, 15 m hit, and penalty stroke. For serious rules breaking on the part of the players, the referee may use: green card (a simple warning), yellow card (brief elimination of the player, usually 5 minutes), and red card (expulsion for good from that game).

The hockey ground is usually made of artificial turf or grass. Recently, new types of pitches were introduced: sand and water-based for an easier circulation of the ball from one player to another. The field is of rectangular shape, its length of 100 yards and the width between 55 and 60 yards. It consists of two identical shooting circles - one for every team - 16 yards distant from the goal posts and is divided by the centerline. The two goal posts are placed on both ends of the ground. 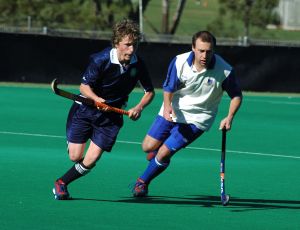 For playing hockey, the combatants need: a hockey stick, a ball, mouth guards, shin guards and a padded glove, and goggles (the latter only during some tournaments). The goalkeeper needs a helmet, leg guards, and special shoes called kickers. Women wear skirts (except for the goalkeeper) and men wear shorts. The top part of the clothing is either a short-sleeve or a sleeveless T-shirt. According to the new rules, all 11 players are allowed to play out on the field, but then they have to abide by the general rules of the game: no helmets and use only of the stick.

On the national level, the International Board of Field Hockey organizes various competitions:


Some of the most important competitions at the club level are in: 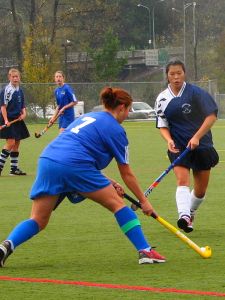 This sport has been attracting more and more fans around the world. Recently, a movie based on hockey called "Chak De India" was released in Bollywood which was a hit.