The synonym of enthusiasm and zeal, football or soccer posses number 1 ranking in the most popular world sports. It's more popular with men, but women playing football has increased in the past few years. While men's football has been popular since the 19th century, more and more women clubs have appeared on the football stage in early 1970s. 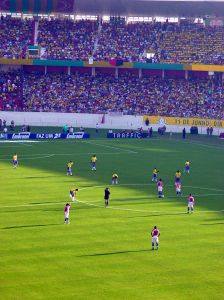 It is played in team format and every team has eleven players. The limit number of substitutes permitted in the official tournaments is three. The common reasons behind sending substitutes on the field are injuries and tiredness of a player, but the replaced player cannot be part of the same game again.

Players have specific roles: goal-keepers, defenders (4) - prevent the ball to come near their goalpost; midfielders (4) - coordinate the ball passing in the adversary's ground; forwards (2) - aim to score. Regardless of their role, any player may score. A team has a captain - wears an armband-, an experienced player who is in charge of coordinating the team while they are playing and to be there when the referee does the coin toss at the start of the game.

The game starts from the middle white spot of the field. The idea is for a team to score goals by kicking the ball inside the goalpost of the opponents through a combination of passes and dribbling. When the ball is sent out behind the goalpost by a defending team, a player from the other team kicks the ball to a co-player from the corner spot. When a team's players have the ball, the opponents have the right to intercept passes. But pushing, shoving, or defending by causing the opponent to fall is considered foul.

There are three referees involved: one controls the game and whistles when there is foul, offside, hands or corner kick; two on each sideline who communicate with the main referee about offside position of players or when the ball is out. Only the goalkeeper may use hands and players are allowed to use them only when they pass the ball from outside. Head, chest and feet are the normal body parts they use to strike the ball in a desired direction. For infractions such as injuring an opponent severely or arguing with the referee or simulating a falling, the referee is required to grant a yellow card. A red card is granted when a player repeatedly causes injuries or arguments or receives a second yellow card; the consequence of a red card is that the player is sent off the game and misses the next one.

In the end the team who scores more goals wins. If a player scores, accidentally, in the goalpost of his team, the opponents get 1 point. 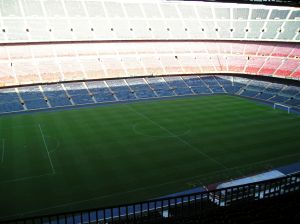 The official dimensions of the rectangular ground should be 105m x 68m for organizing an international tournament. A layer of grass or artificial turf is laid on it. It is divided in two and the margins are marked. There are two goal-posts and each is defended by a goal-keeper. Eleven meters away from the goalpost line are visibly marked for penalty kicks. There is a defined area of 16 meters that is also marked; if a player from the defending team causes foul or touches the ball with his hand, a player from the offensive team can be designated to kick the ball from the penalty (11 meters) area.

The players' kit comprises of shorts, T-shirts and shin guards, socks, and shoes for the feet. For avoiding the head injury, some players use headgear. Accessories like watches and jewelries, which may be harmful for players, are not allowed on the ground. Goal-keepers use special gloves and his kit is distinct in color. The referees have black T-shirts and shorts and the sideline ones use a flag to fulfill their role. 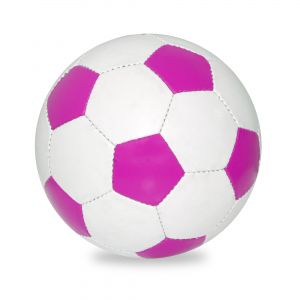 The standard ball has a sphere shape, weighs almost 500 grams and measures about 70 cm. It has a special design with black and white pentagons and hexagons linked together. The ball is usually made of leather to keep it strong.

Daily training is the key to developing your football skills. Proper diet and sleep will always help you to stay it and healthy and concentrate better on the game you are going to play. Watching videos of successful teams is another way to become efficient in your playing. You can play it for fun, but you also need a lot of energy, as a lot of running back and forth is involved. In order to boost your stamina, you can practice even swimming for your muscles. Concentrate on playing one role on the football field (goal-keeper, defender, midfielder or forward) and learn the tactics and responsibilities of that role. Maintain a positive attitude all the time before, during and after a game. Whether you want to play football just for exercise or plan to become a professional player, have good communication with the other players and members (in case of a club team).

Besides national tournaments for each country, there are also continental and world competitions. For continental championships, national teams play against each other divided in groups within their continental area. The best teams - usually the 1st and 2nd in each group - meet and play for another round of groups, 16th-finals, quarter-finals, semi-finals and final. That phase decides the winner of that tournament. As far as World Cup championships, national teams play with each other within their continental area and again, the best teams meet up at the World Cup tournament to decide who the best is. These tournaments are organized every four year. Some of the world''s men best teams are: Brazil, Italy, Argentina, England, France, Germany, Spain, or Portugal. Both continental and World Cup competitions are organized every four years.


On the clubs level, there are national and continental tournaments. The most famous European competitions are: Champions League and Europa League, where top 5 clubs of each country can participate. There are qualifier matches and group ones. In South-America, there are 2 competitions: Copa Libertadores - for clubs, and Copa America - for countries, including Central-American ones. In Africa, Africa Nations Championship is the most famous. Asia''s popular tournaments are Asian Cup and Challenge Cup. All these competitions are annual. Some of the most successful famous club teams are Manchester United, FC Barcelona, Real Madrid, Steaua Bucharest, Juventus Torino and the list continues. Lionel Messi (Argentina), who plays for FC Barcelona, has become the highest paid player, according to the French newspapers.