Contemporary tennis emerged in the dusk of 19th century in the United Kingdom and was referred to as Lawn Tennis. From there it gained popularity and spread throughout the world. With time, indoors tennis courts were created.

The goal of the game is to hit the ball with the racket in such a way that the opponent cannot return it. The ball has to pass over the net. If the ball touches the adversary ground, it needs to fall inside his or her marked perimeter. Typically, players engage in ball exchanges. It is possible to "attack", by advancing towards the net and repelling the adversary balls without letting them fall on one's field.

Players need to score points in order to win games. Games are grouped in sets and sets make up a match. During one game, only one player serves. In the next game, service passes to the other player. The first serve is usually aggressive (a fast ball). If the receiver fails to return it, it turns into an "ace" and the server wins the point. The first serve can also land the ball in the net or outside the court. If the server misses his or her first serve, he gets a second chance at no point penalty. If the server misses the second time, he or she loses a point.

In tennis, women play three sets; only the last set, usually, doesn't allow for tie-break (situation when at the score of 6-6, for the winner game 7-6, a player needs to be at least two points ahead of his adversary - e.g. 6-4). The same goes for men, except that they have to play 3 to 5 sets. To win a game, the first point is 15, the second one is 30, the third one is 40 and the last one will conclude the game. Draw at 40-40 is broken by two consecutive wins.

Tennis is mostly played in singles or in doubles. Singles games are unisex. Doubles are also, usually, male-only or female-only; but there is greater allowance for mixed teams, with a man and a woman in each team. In some competitions, doubles teams represent a certain country. In others, team players can be from different countries. 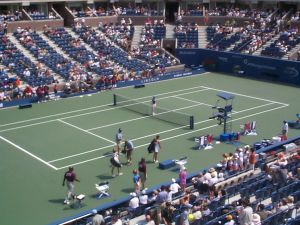 Tennis courts need to be a plane surface for best ball control. Typical coverings are grass, concrete and clay. For singles matches, the outer perimeter is a 78' x 27' rectangle. For doubles, an additional area called alley (or tramlines, in the UK) is provided, thus increasing the width to 36'. The actual playing perimeter is surrounded by some extra space to provide for the covering of high-speed balls. The middle of the play perimeter is divided by a 3' high net. Generally, hitting the net with a ball is considered a mistake.

For amateur play, a marked field with a dividing net, two rackets and a tennis ball are enough. 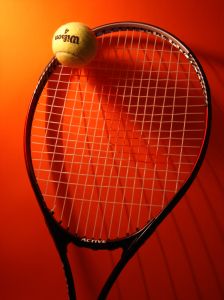 Professionals use a few of supplementary accessories. They attach a ball clip to the waist of the shorts or skirt. Then place a ball in the clip to have it handy, if needed, for the second serve. All clothing is especially designed to facilitate evaporation and ease of movement. Modern players use aluminum, titanium or graphite rackets. These materials are lighter and more durable in case of accidental impact. With the help of new technologies, the racket strings are made of stronger, synthetic fibers, providing increased repulsive power and durability. The edges of the rackets have outside grooves to protect the strings from wearing out and snapping when they accidentally touch the ground.

Tennis balls are made of hollow rubber covered with a layer of resistant canvas. A tennis ball can sustain prolonged pressure from repeated racket pounding and scratching against the ground. In time, they need to be replaced. Racket handles are wrapped with soft bands made of absorbent materials that minimize palm sweat, thus providing for a better grip. Wristbands are used to soak up additional sweat. Specific tennis shoes are developed with plane soles, for stability. Often times, tennis is played under sunny conditions, so players use caps to shade their eyes. In general, tennis clothing is light due to the intense exertion. Light colored T-shirts with short skirts are a common sight among female players, while men wear T-shirts and shorts.

The ball has to fly over the net. Theoretically, it can fly at any height, as long as it will potentially land into the adversary field. Nevertheless, very high balls are usually very easy to return. That is why typical exchanges involve hard, low shots that barely make it over the net. Thus, a good player will have to balance the constant risk of hitting the net with delivering "uncomfortable" balls to his or her opponent.

Tennis involves a lot of running and stopping, which demands an excellent physical condition. Exhausted players are often a common sight at the end of a game. As a useful tip, tennis players drink a lot of water between games.

Ball exchanges can be quite drawn out, making for a more exciting match. There are quite a few tactics players use in order to strike the ball effectively: backhand, forehand, volley, and smash. Usually, the second serve is softer, more careful, and therefore easier for the receiver to return.

In principle, any person comfortable enough with a racket and a tennis ball can play tennis. But it takes a lot of time and practice to make a difference in a professional tennis circuit.

Earlier tennis was regarded as a game for the English upper class. It was played on a lawn or clay field.

In earlier times, the rackets were made of wood and had a standard size. In recent times, different metal alloys have been introduced in use for frame manufacturing, making wood obsolete. In later half of the past century, the color of the ball was changed from white to bright yellow or green for the sake of better visibility.

Tennis is part of the Olympics and the Commonwealth games and is equally popular among all ages.

Although tennis is still enjoyed by the wealthier people who join tennis clubs, nowadays it is much more accessible to just about any sports lover. It is a clean sport, without fouls and it has lots of fans around the world. There are regular Open tournaments like the one at Wimbledon in England, Roland Garros in France or Melbourne Park at the Australian Open. Davis Cup is an international competition which counted 133 countries in 2010 and is an event supported by the International Tennis Federation (ITF). 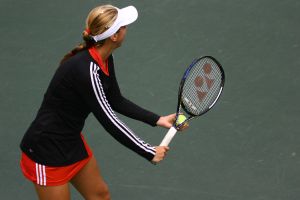 Tennis is one of the sports that will always be played both at professional level and amateur. It's a sport without age.